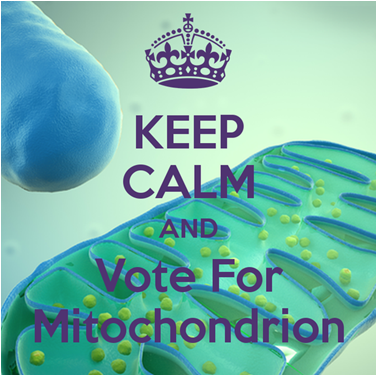 Mitochondria are bacteria ancestors engulfed by cells millions of years ago. By mutual consent they became permanent subtenants as described by the endosymbiontic hypothesis. Their major job in the cell is to produce energy by the use of oxygen. Therefore, mitochondria are often refered to as „powerhouses“ of the cell. Mitochondria control the metabolic flow within cells by linking the degradation of sugars, fats, and amino acids to the generation of energy by oxygen.

But mitochondria are more than just energy deliverers. They are mediators of cell death and control cellular calcium balance. Further, mitochondria are involved in the process of aging; it was shown that specific mitochondrial disturbances can increase lifespan in worms by the upregulation of genes which control the stability of proteins (1).

Mitochondria are promising targets in medicine. They are the cell’s Achilles heel in stroke and myocardial infarction. Blockage of a blood vessel induces energy depletion with devastating consequences for high performance cells like neurons and cardiomyocytes. But also pathologies like Alzheimer’s disease and Parkinson’ disease seem to have a mitochondrial component: defective mitochondrial fission and fusion.  Bypassing mitochondrial activity in order to become independent of oxygen , known as the „Warburg effect“, is a hallmark of agressive cancer cells (2).

As a leftover of their bacterial past, mitochondria have heir own circular DNA which codes for 37 genes. During evolution, they outsourced parts of their genome to the nuclear DNA. So whenever the mitochondria need to activate these genes, they must tell the nucleus.