Zoology is the reason why I studied biology. I am fascinated by animals, their behaviour, their adaptations, and their „special features“. Unfortunately, the first thing you get to learn when you start to study zoology is that it will be hard to find a job later on. Eventhough, I chose genetics and pharma as my main subjects, zoology has still a place in my heart and so I would like to share some oddities of the animal kingdom with you.

The exciting sex life of snails 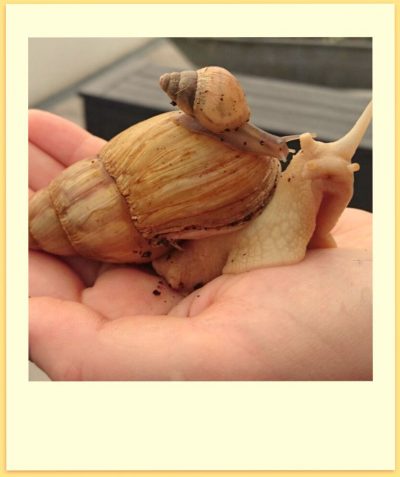 Todays issue is about the snail, a completely underestimated and overseen animal. But actually, these guys are pretty cool! I am housing 15 achat snails (Achatina fulica) and I don’t get tired of Snail-Watching. Snails are social animals and love beeing in a crowd but most likely you will encounter them alone when they are ‘on the road’. Snails love to cuddle and the smaller ones like to have a piggyback ride on the bigger ones. But the really interesting thing about snails is their secret but extravagant sex life. They are not prude and some species love to do it in a group with their flirtation taking up to 12 hours. Whenever they are not hungry or sleepy they make love…

Terrestrian snails are hermaphrodites, which means that each individual has male and female sexual organs (the absence of a conflict of sexes might explain their mutual consent about certain sex practices…). Mating strategies vary among different species but here a two virtuous exaples:

The first example comes from the grapevine snail (Helix pomatia). In their foreplay, these snails make use a sadomas 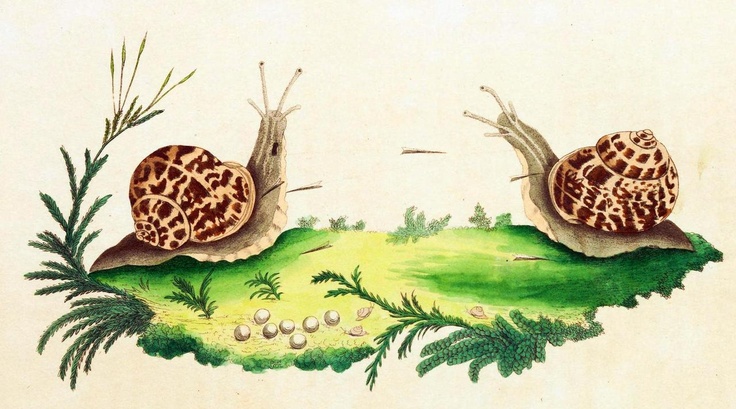 o practice and shoot, cupido-like, a love-dart into the body of their partner. These darts are up to one centimeter long and consist mainly of calcium carbonate. The darts are coated with a stimulant, which increases the peristaltis in sperm-transporting tubes to increases the chances for paternity. The image does neither show the grapevie snail, I guess it’s Helix aspersa Mueller, nor is it biologically correct but it really makes me smile 😉 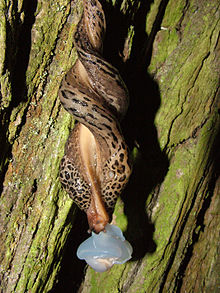 The second example comes from the leopard slug (Limax maximus). This guy does not only look super stylish with its leopard print, it also has an unusual mating method which could be a performance in Cirque du Soleil! When two of these hermaphordites meet, they start licking each others tail tip so that they are crawling in a circle for a while. When they are stimulated enough, they produce a long thread of mucus and hang suspended in the air from a tree branch, drip rail or other. Swinging upside-down in this position, called lamp globe, they mate. Image by wikipedia.

Worth mentioning that a mating of these hermaphrodites usually results in the mutual exchange of sperm so that both partners can become „pregnant“- But they can decide when the time is right to fertilize the eggs by their own sperm bank! Snails can store sperm up to two years until they feel that the time is right to have their babies.

I hope, I could convince you that snails are worth a closer investigation,