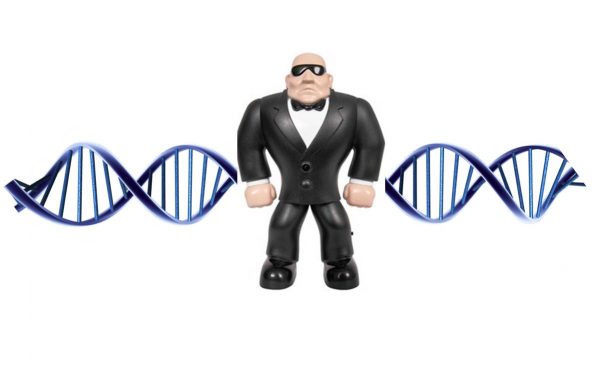 I’m doing my PhD in epigenetics and even though this field is not new, researchers from other disciplines sometimes don’t know what epigenetics actually are. The word epi is Greek and means above in this context. Epigenetics are “add ons” to the DNA-sequence, which help to interpret the code of life in an individual way.

Within the last twenty years, we deciphered the human DNA-sequence, counted the genes coded within and finally got the feeling that “we” must be more than just our DNA-sequence. Why? Well, the human DNA is not as gene-rich as the DNA of other organisms. For example, the wild-cabbage (Brassica oleracea) has almost five times more genes than humans have, but still it didn’t win the Nobel Prize yet… It seems that size doesn’t matter – you just need to know how to use your hardware and this is where epigenetics jumps in and provides the complex software.

Every cell of our body contains the same DNA-sequence. However, we are composed of 250 different cell types. It needs to be strictly controled when genes are on or off – otherwise you would look like the blob. Every gene has a “door” and when this door is open, the RNA-Polymerase can step inside and transcribe the DNA-sequence into an RNA-sequence that is forwarded to the ribosomes to become a protein. To control when the polymerase can visit a gene, the DNA-sequence has epigenetic doormen who decide when a particular DNA-sequence can receive visitors. These epgenetic doormen use two simple mechanisms:

But there is also an epigenetic version of the morning-after pill: If the RNA-Polymerase somehow passed the doormen (bribary, inattention etc.) and the RNA-transcript is already on its way to become a protein, there is still the option to leave the dogs out to catch and degrade it. These epigenetic dogs are so-called micro RNAs which bind to their target sequences and arrange their degradation.

Through the above described mechanisms, epigenetic gimmicks determine which gene is when how active. This orchestration is massively important during the development of the embryo but as well in the adult organism. The “please do not disturb” door plates can be removed if necessary, which allows for adaptations according to environmental conditions. For example, smoking and other drugs uncover doors of genes, which are involved in dependency and addiction. Green tea is speculated to remove the barbwire from door mats of genes, which can repress the generation of tumors. Our environment, behaviour and nutrition has an impact on our genes by influencing the epigentic doormen.